I’m not really done processing this first episode of Supernatural, so there’s going to be a lot of babbling, probably. Sorry about that. But I do want to share my thoughts and reactions on the season premiere, so I’m doing this while it’s still fresh (I just watched the episode). And hope I won’t forget anything.

So, we left things a bit… well, dark, at the end of season 10. The Darkness is free, Death is dead and no one really knows what’s going on.

Season 11 starts off about a couple of hours later, so almost no time has passed since Sam and Dean and Baby have been swallowed by the Darkness. Sam wakes up in the car, the smoke is gone – and so is Dean. Sh*t.

Through a couple of flashbacks, we learn what it is that happened. Sam got knocked unconscious right after Dean just disappeared from the car. Dean, on the other hand, saw a woman outside the car. He soon realizes the woman is the Darkness. They talk, she shows him her Mark of Cain on her collarbone, but Dean doesn’t even try to kill her, and then she disappears. 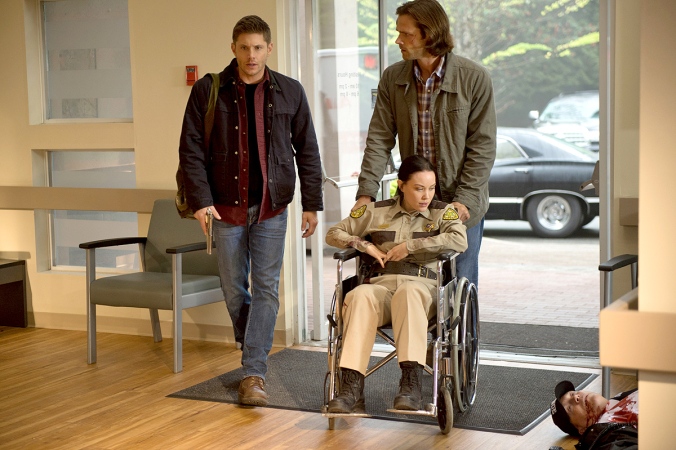 Sam wakes up, finds Dean lying in a field, and the two get in the car and drive back to town, but end up stopping at the sight of overturned vehicles and a couple of dead bodies. They get out, meet a cop who seems to have been the one who stopped some of the crazed road workers – all of whom seem to have been affected by the Darkness and gone mental. Isn’t that just fun. Sam and Dean take the cop to the hospital because she’s been injured, but find the hospital has been attacked too. Dean takes care of the woman’s injury while Sam goes to check if he finds anyone else in the hospital. There’s another crazed road worker trying to break open a door; the crazy guy dies, and Sam finds a man and a baby hiding behind the door. 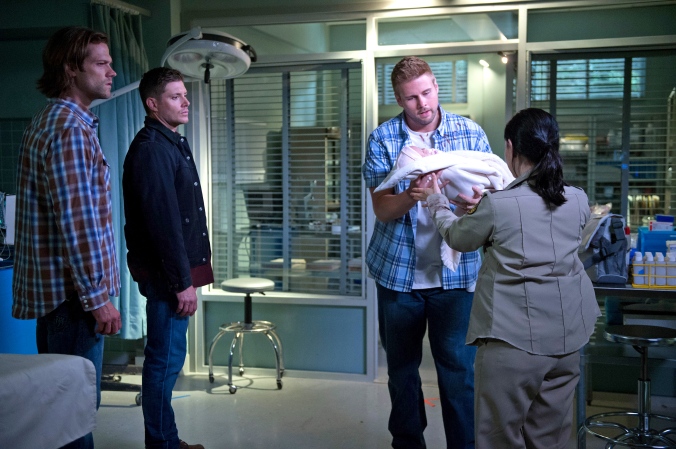 They soon realize that the man has been infected too, and he gives the woman his baby and makes her promise to take care of her. Sam and Dean have a fight about whether or not they should kill him and everyone else infected by the Darkness, but end up letting the man go, because Sam insists on finding a cure rather than just putting a bullet in everyone. 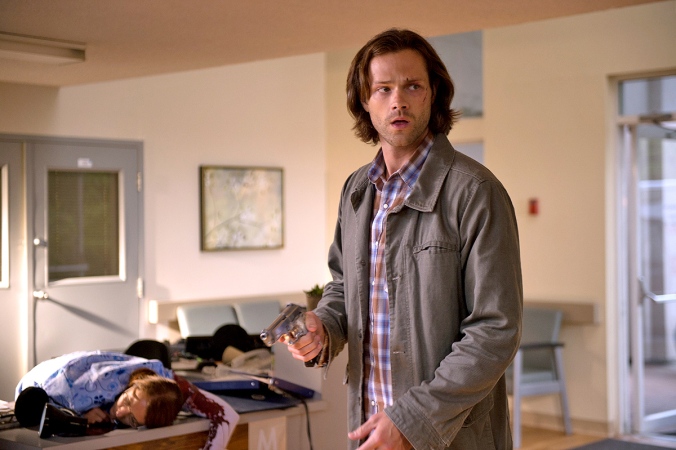 Before long, another truckload full of infected people pulls up in front of the hospital, and the four of them are now trapped. Sam and Dean make a plan – after a lot of fighting, as usual – that has Dean, the cop and the baby leave while Sam attracts the infected people’s attention and makes them follow him so the other three can get out safely. There’s a fight, and one of the infected people bleeds on Sam – which seems to be how the Darkness is transferred from one person to the next. Awesome. So now we have an infected Sam. And of course, when Dean calls to tell Sam that they made it out safely, that the Darkness seems to have been only infecting people locally, Sam doesn’t tell Dean that he’s been infected. Because why would any of them actually learn from their mistakes and start communicating with each other? 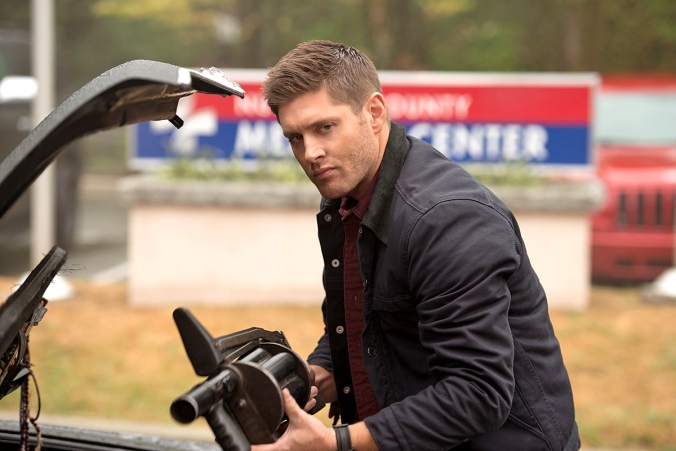 So that’s Sam and Dean. We see a little of what happened to Cas and Crowley, too. There was a fight, but before Cas could actually kill Crowley, he smoked out and went to posess a new meatsuit. Cas, still fighting the curse Rowena put on him, hides in a barn, but he’s discovered and flees. He ends up praying to the angels to come get him, because he’s willing to take whatever punishment Heaven has in store for him, if only they help him and stop the curse, because he doesn’t want to hurt anyone else. Two angels come, but they don’t take him to Heaven; they shackle him and put a black bag over his head, and that’s all we know for now. 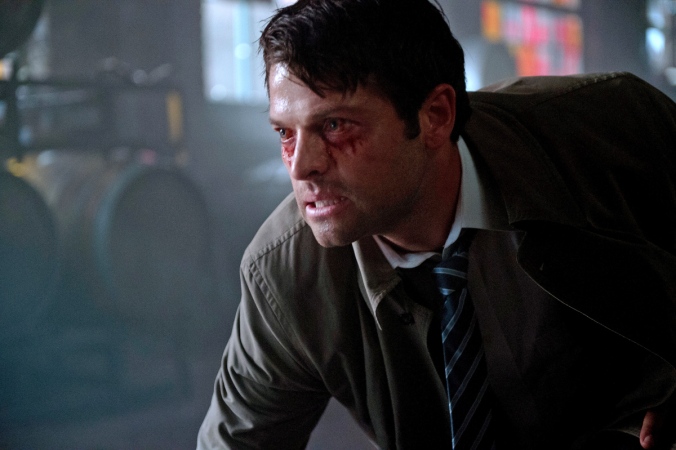 Crowley‘s new meatsuit is a woman who apparently asked her husband for a rather special birthday present: the woman apparently wanted to have an orgy with the neighbors. Crowley kills all three of them and calls for two of his demons to help him get back his old meatsuit. They do, but then tell him that there’s rumors about the Darkness going aroud in Hell, and that half of Hell heard something that sounded like a crazed animal coming from the Cage. You know the Cage. The one where Lucifer and Michael and Adam are locked up? Yep, that cage. The demons think that either Lucifer or Michael is trying to warm Hell from what is coming. Which can’t be too good, if one of them is actually willing to warn people. 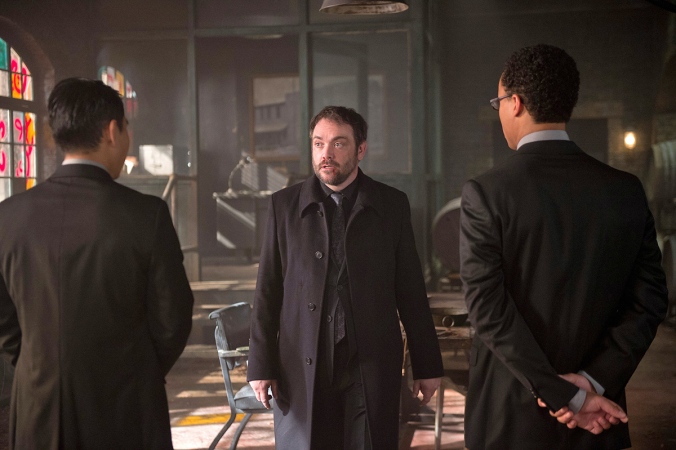 Now, the last thing we see is the cop changing the baby’s diapers in a restroom at some gas station, and finding a mark on the baby’s collar bone that looks suspiciously like a tiny Mark of Cain. So, theory: the baby is the Darkness, or at least part of it. Isn’t that just amazing. 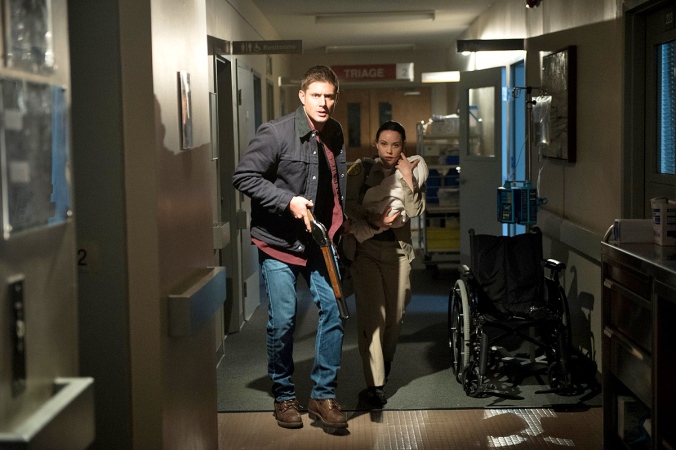 Verdict: it’s a bumpy ride. It’s not a perfect start into the new season, but then again, what’s perfect? It’s definitely Acceptable. The acting was as great as always, the dialogues where good, but it sometimes seemed like they were trying a bit too hard to insert the usual Sam-Dean-fights into it. The whole Sam-sacrificing-himself-because-he-feels-guilty thing is getting old –  and I know that that’s just who Sam is, but still, it almost seemed forced here. And Dean being the we-have-to-save-this-baby-and-Sam-it’s-both-our-faults also seemed a bit off here, I don’t know why. But now that Sam’s infected too, I’m pretty sure Dean is going to hop into the finding a cure wagon really quickly. And then they’re going to find and free Cas, because that’s what they always do, and isn’t that what we love about them so much? All I’m hoping for is that the creators keep their promises and have Sam and Dean finally working together for once. They promised!

But, all that being said, it’s Supernatural, so of course I loved this episode.